So, the Austin project was finished in 2017 and I have since moved house up to Cheshire and have got a number of new projects on the way. The first being a 1949 Lea Francis 14HP special. I'll update the gallary with photos of that build and will startt he blog going too... 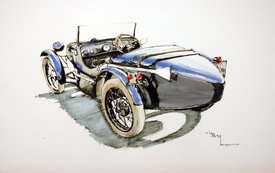 I will be providing regular updates on the BLOG but will include the major milestones here..

The first trip took place on August 13th which was actually several trips around the block. Several due to each of the children wanting thier "go" in daddy's car. All went well and the car performed far better than I expected.

The second trip out was on the 11th September (we went on holidays for the last two weeks of August, hence the gap) where I took it a little further and ventured out to one of the local country pubs for a well earned beverage. My next door neighbour, Paul, followed behind in his Morgan and we drove the 3 miles or so there with no trouble whatsoever. On the way back Paul clocked me at 58 MPH which, considering the car had developed a slight missfire or uneven running by that point, I was most impressed with!! Paul reckons we got something like 65MPH on the outbound journey...

Following the first trip out and the engine becoming "lumpy" I did some investigation... Firstly looking at fuel which all looked ok.. Then looking at spark which at first seemed good but then I noticed it seemed a little inconsistent.. Upon further investigation I found that the rotor arm on the dizzy had a fair bit of sideways movement and hence was not operating as hoped...

So, stripped the dizzy to find the bushes on the rotor arm shaft where stuffed... purchased a new set, installed and all is good!! I did also find that one of the contacts on the points was wobbling around, so sorted that too...

Car pretty much confined to the garage now as the winter weather has arrived. Will do some tinkering with a few things over the dark months and hope to be ready to put some serious miles on it in the spring..

As can be seen from the images below things look good!

Loads of thanks to a few organisations that have really provided some great service.

Firstly, Washington Coachworks. These  guys did the body  paintwork and have made an amazing job! I'll take credit for picking the colour but the way it has turned out is beyond my expectation. The black contrasts so well with the primrose yellow and the finish is perfect! The price for the job was very good indeed and they kept me updated with progress all the way through.. Thanks Alan & Phil, a  Great Job!!

Secondly, Tudor wheels. Richard @ Tudor wheels did a great job of refurbishing the wheels. One needed a complete respoke, two had the outer spokes replaced and one was pretty much alright. They were all blasted, cleaned up and powder coated and look fantastic. Again, Richard  kept me updated with progress and also helped me by fitting the new tyres.. Didnt want to let "KwikFit" loose on his hard work!!

Thirdly, Tony Betts (wife) @ 7County Austins for the seating kit. when I received the kit it looked amazing and I am very pleased with the outcome.. I've gone for the slightly loser look rather than having the leather pulled tight. This was the way the seats were originally and also should not put as much stress on the stitching..! Tony has also supplied a fair few parts for the project along the way..

Lots of thanks must go to Jamie @ The Austin Seven Workshop for the supply of many parts along the way. Always a pleasure to talk to and always has just what you need! 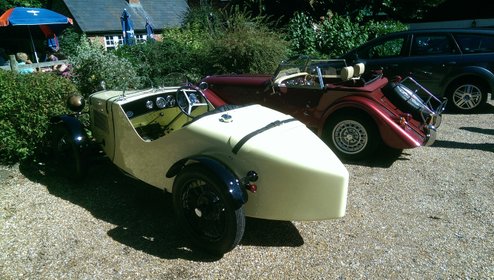 The Forum linked above is a great place to go for advice, expertise and input to whatever issue you are trying to resolve..

Austin Sevens are old, simple, and frustrating things, much the same as those that restore them!